Talk with most ed reformers about the importance of the Common Core and many will bring up the need for higher learning standards and more academic rigor in the classroom.

Unfortunately, misguided and poorly designed implementation efforts have resulted in many disadvantaged students being subjected to “grit building” learning activities that are comparable to being required to climb a rungless ladder…

In January, 2015 it was revealed that 51 percent of K-12 students were living in poverty. One would expect that a data-driven campaign to raise academic achievement in America would take into account this staggering figure. The Ed Department awarded Race To The Top funds to assist states that adopted the Common Core Standards and has established spending priorities and guidelines to support successful implementation of the Standards.

At a time when so many students are living in poverty one would expect that funding priorities would include, additional staff, smaller class sizes, after school programs, morning programs, school counselors, along with essential wrap around and community-based services to help ameliorate the affects of poverty.

So while these new and improved tests will allow parents to see if there child is “on track” for college and careers and how effective their child’s teacher is, many poor children will continue to struggle to learn without being able to see the chalkboard…

“My colleagues and I have conducted 2,400 screenings on students in three New York City middle schools: one in the South Bronx, one in Williamsburg and one in the Washington Heights section of Manhattan. We have prescribed and distributed 450 free pairs of glasses to the nearly one-fifth of the kids who had 20/40 vision (which means street signs and chalkboards are blurry) or worse. Many of the kids knew they couldn’t see the board, but hadn’t thought to ask for a checkup, because their vision had deteriorated gradually.

Children who struggle to see don’t tend to make for very good students. At Middle School 223 in the Bronx, the principal reported dramatic differences in several students once they’d received their glasses. An eighth-grade boy who had previously been reprimanded for talking during class stopped being disruptive. When administrators asked him what had caused his sudden change in behavior, he explained that he’d been asking other students to help him read the board. A sixth grader who had been notably quiet in class revealed that she had stopped looking at the board because she couldn’t read it.

So while teachers across the country attend close reading professional development sessions, students in poorer schools and communities won’t come close to reading a book in the school library because there are no funds to hire a librarian or purchase new reading material.

“More than half of school libraries in California lack even a part-time state-certified school librarian, compared with about 20 percent nationwide, federal data shows. Urban districts are less likely to fund collections in every school.

Researchers have documented a stark difference in the number of books available outside of the classroom to children from rich and poor families, with children from low-income families typically having fewer books at home and less access to public libraries or bookstores.

Students at many D.C. schools have never had a full-time librarian or an updated book collection, and not all schools have permitted students to check books out of the library.”

While ed reform leaders are proud of their efforts to increase college readiness and raise standards, students in 20% of the public schools in New York City aren’t able to raise their voices in a choir because there are no arts teachers.

“New York City’s comptroller plans to release a report on Monday quantifying what student advocates have long suspected: that many public schools in the city do not offer any kind of arts education, and that the lack of arts instruction disproportionately affects low-income neighborhoods…

Between 2006 and 2013, spending on arts supplies and equipment dropped by 84 percent, the report said. When money is tight, arts education is often one of the first subjects to be sidelined, the report noted.

It said the trend had accelerated as schools focused more on meeting accountability standards, shifting their resources from subjects seen as nonessential, like arts, to preparation for English and math tests…”

“Just 45 percent of public schools have a full-time registered nurse, according to a 2007 study from the National Association of School Nurses (NASN). Another 30 percent of schools have a nurse who works part time in one or more schools, while 25 percent have no nurse at all.

There has been no comprehensive study since then, but anecdotal reports show that more school nurses are losing their jobs as budgets are cut and health services are a low priority, says Carolyn Duff, president of the NASN.

To determine how many nurses are needed, administrators should consider the number of students eligible for free or reduced-price lunch who may have less access to outside health care, and the number of emergency services calls from the school each year, Duff says.

No federal legislation mandates school nursing, and as of 2005 only 14 states had established student-per-nurse ratios, according to the American Nurses Association. With no nurse on duty, the responsibility for administering medications and treating students falls on administrators, educators and staff who may not have enough training.

In an interview about recent budget cuts, Philadelphia Superintendent William Hite told DA the district was investigating the events leading to the girl’s death. The district meets the state-mandated ratio of one nurse per 1,500 students, so hiring more nurses is not a priority, he says.

The ratio of nurses in Philadelphia schools was 1 to 950 students before the cuts two years ago. And the reduction has led to poorer student health services, according to a May 2013 Education Law Center of Philadelphia survey of school nurses, parents and special education advocates.

Childhood obesity has more than doubled in the past thirty years, so one would expect that a data-driven education reform movement would make purchasing new playground and sports equipment a priority seeking to decrease sit and learn / sit and test time, rather than buying more computers to “deliver” software solutions and administer the new Common Core assessments.

The Race To The Top funding priorities are more about measuring student achievement and teacher quality, rather than providing essential academic and support services to help our neediest students achieve higher standards.

Expecting the implementation of higher standards to improve student outcomes without investing in necessary wrap around services is like raising the recommended amount of exercise for young people while lowering the recommended calorie intake for youth and then expecting these new standards on their own to decrease the rate of childhood obesity.

Ed reformers data-driven and test-centered approaches to school improvement make as much sense as a doctor advising overweight patients to spend their money on a tape measure, scale, and blood pressure machine rather than purchasing sneakers, a bicycle, or membership in a gym.

Education reform programs implemented in classrooms are focused primarily on measuring the manifestations of poverty and treating student “symptoms” such as low achievement or poor attendance, rather than addressing the underlying “illness” of poverty that is impacting students in their homes and communities around the United States. 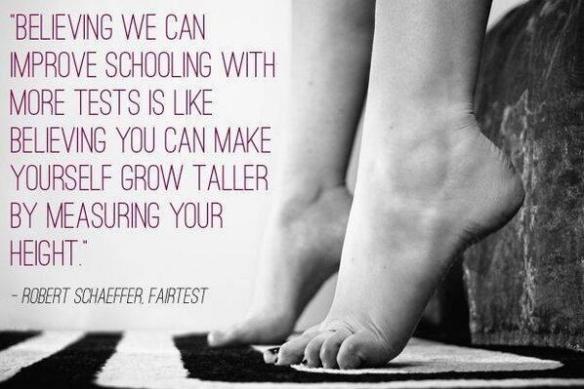